I was going to write everything from the Cycle Tour in one post, but I figured our race day deserved its own.

So, after the two-day-craziness that is the Double&Again, it was time.

We had a start time of 6:54 - amazing! Amazing because we got to finish a large part of the race before it got properly hot. This was a really important thing for us because of my heat regulation issues.

The other thing about an early start time is an early wake-up call. My alarm went off at 04:00. When my eyes opened there was a feeling of disbelief that I was awake at 4 in the morning. Then there were the slight heart palpitations at the realisation that we were about to do 109km with 35 000 other people.

Grant arrived to fetch me at 4:50ish. He was so excited he was jumping up and down...literally. This was his attitude so early in the morning 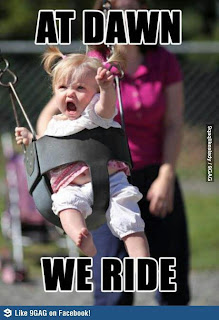 I took a little bit longer to get on the same page but I got there. Early wake-up call...

One of the things the race organisers did was arrange for us to leave from Greenpoint Stadium with the handcyclists with the traffic escort. We felt super important that we had an escort. We got there at 5:30 (Grant was stoked cause we arrived on time) and we started getting ready for the race. 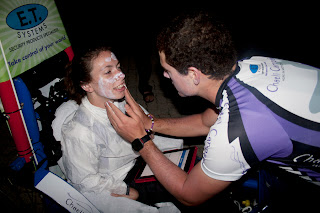 We left the stadium around 6 and this is the point where I stopped freaking out and I started getting excited.

I have only ever been on training rides with Grant and max 5 people, so the idea of riding amongst 35 000 was insane!

When we reached the start, we had to negotiate a few pavements (interesting with two more wheels than usual) but we sorted it out. Grant helped a few of the handcyclists as well. I was quite impressed at not only his gentlemanness but the fact that he was doing all that whilst keeping me and the buggy upright along with his bike. Beast.

The vibe at the start, actually the entire race, was unlike anything I have ever experienced. The number of people screaming support was amazing - people lining the streets and cyclists.

What I loved was that because I'm in the buggy, I have more of an opportunity to take in all the reactions. Many people shouted recognition at me but the best thing for me, especially when we're going uphill, is that focus changed to Grant - he's the one who deserves the props, he's the one doing the hard work - it's the way it should be. So much respect.

While Grant was cycling, I was mostly tweeting (apologies for not being as good at updating the Facebook page, I was a little preoccupied). Tweeting in motion is not as simple as one would think...much co-ordination is required - I'm actually kinda impressed with myself that there weren't more spelling errors. I got really excited when people retweeted and replied and commented. Successful social media mission! I also got to tell Grant when people did this, then we both got excited!

One thing from Edinburgh Drive that was awesome, aside from hitting 68.8km per hour - my faith in Grant's ability to keep us alive decreased slightly at this point, and then we didn't die, and my faith was properly restored...but 100% more than before - was that we rode passed a little dude on a tandem with his dad, and he told us to have a great ride and that he'll see us along the route. I just can't deal with that level of cuteness. I just can't.


Along the route we had planned on having more photos to share but plans change when you're actually in a situation...so, here are some that we managed to get for you guys 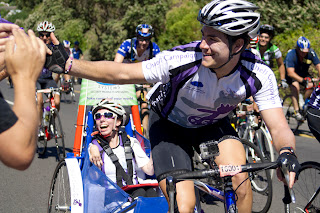 Supporters from ET Systems on Suikerbossie was unparalleled.
Huge THANK YOU for giving us (Grant) the gees to get up that mother of a hill!
:)

Getting to this point meant that we didn't have far to go to the end. It also meant that we were, once again, me anyway, in unchartered territory (remember, bakoven marks the end of where we had trained) which meant more trust in Grant required - all good!

We got to the finish line and crossed it with a time of 5:29:43!
When we got to somewhere to stop it was pretty close to the finish and it had a nice little patch of grass. It was our place.

They gave us our medals and with that I think that was the moment we realised what we had accomplished. After all the preparation and planning, we finished it. I think there was a hint of relief for all of us that we were done, and nothing went wrong - let's face it, there were many bad situations that could have materialised, and nothing did. Success, good and proper.

Both myself and Grant were emotional at the end. Both crying.

For me, finishing was so much more than getting a medal and ticking the Cycle Tour off my list. It encompassed everything that I work at achieving through my activism - inclusion, awareness, everything. But more than that, I think the reason I was as emotional as I was, was Grant.

G, you are so amazing that you gave me this opportunity. It would've been so much easier for you to just be a Chaeli Rider. But you didn't, and you aren't just a Chaeli Rider. There are no words to adequately explain how much I appreciate everything you do for me. The fact that you help me with whatever I need help with and do the not-so-polite-things-to-mention that disability entails, like emptying catheter bags into energade bottles on race day (oops, mentioned it. Oh well) make you that much more amazing. Not many people are willing to do that for someone. I have so much trust and faith in you it's unreal. You're the captain conqueror. You make so many things possible.

I feel so privileged to have you in my life. Thank you.